The Mound of Harald the Conqueror is a short adventure inspired by old-school gaming. Explore the ancient tomb of a famous explorer, and fight some of the most memorable monsters of the genre. The dungeon has been modernized enough to entertain even a more experienced audience.

Invite your players to plumb the tomb of one of the world's greatest explorers - Harald the Conqueror.

Secrets and danger abound, as does the promise of treasure, but not everything is as it seems. They'll be presented with many choices, both moral and social, to test their mettle and reward/punish them in kind. Pick it up and run it as you read,

This low-level classic dungeon will give the thrill and excitement of the classic adventures with plenty to discover.

Was Harald as great as history remembers? Kattefjord has its believers, but everyone can have ulterior motives... 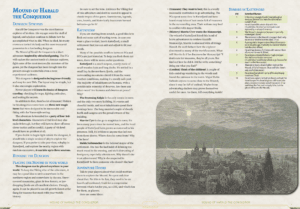 Harald the Conqueror was the most famous explorer of his time

His voyages were the stuff of legend, and scholars continue to debate how he accomplished what he did. When he died, his trusty crewmen buried his body and his most treasured possession in a foreboding dungeon.

The Mound of Harald the Conqueror is a short adventure inspired by old-school gaming. The PCs will explore the ancient tomb of a famous explorer, fight some of the most memorable monsters of the genre, yet the dungeon has been brought into the present enough to entertain even a more experienced audience.

This dungeon is designed to be beginner-friendly and easy for new DMs. The layout may be simple, but it also encourages exploration.

Newer players will learn the basics of dungeon crawling: checking for traps, fighting ambushes, and looking for secrets.

In addition to that, there's a lot of treasure! Hidden in this dangerous tomb there are three new magic items that were designed to be memorable and fitting with the Norse-style setting.

The adventure is intended for a party of four 3rd-level characters. Characters of 2nd level may also make it through, but they will have to show off some clever tactics and be careful. A party of 4th level should have no problem at all.

If you decide to begin right outside the dungeon, it should take a single session of play to explore the dungeon. If you prefer to take your time, roleplay in Kattefjord, and explore the nearby region with random encounters, it can take up to three sessions.

Cover Art by Wilhelm Steuerwaldt, "A View of Snow-Covered Ruins" (1854)

Only logged in customers who have purchased this product may leave a review.